Florence is the diamond of the world civilization!

Low budget vacations to Florence, the administrative centre of Tuscany, are very popular because Florence is considered to be one of the most beautiful cities in Italy. Moreover, this city has always been an essential part of the world cultural heritage considering that such great people as Galileo Galilei, Dante Alighieri, Leonardo da Vinci and Michelangelo were born here. The Florentine coin has been the standard coinage for the whole Europe. The local Tuscan dialect changed and developed into the Italian language. The navigator from Florence gave names to two continents and the Florentine thinkers gave birth to the Renaissance. Vacation in Venice will let you learn more exciting facts about this city!

Information about the history of the city

In 59 BC there was a settlement on the territory of the modern city. It was called Florentia that means “blossoming”. In the IV century AD it was a big city that served as the Bishop’s residence. Many different tribes attacked the city and this undermined its wealth. In the Х century the city’s regeneration began. One of the most reliable coins in Europe, the Florentine coin, appeared in 1252.

In 1340s the city suffered from the plague epidemic that caused the population decrease. The XIV century marked the beginning of the new Renaissance epoch in Florence. In 1434 the city was ruled by the Medici Dynasty. Saint Antoninus of Florence, the archbishop, wrote about 1448, the tragic year for Florence because of the plague and famine.

The city was also drastically damaged by the fascists during the World War 2 and during the flood in 1966. Lots of masterpieces were saved thanks to the efforts of volunteers from Italy and other countries.

Low budget vacation in Florence is an opportunity to take a look at the picturesque nature of the countryside. What a chance to climb up the Giotto Tower and enjoy the scenery, hills, green meadows and Tuscany fields!

Low budget vacation packages give you a chance to spend a dreamlike vacation and visit such landmarks as the Palazzo Pitti, the Palazzo del Bargello, the Palazzo Vecchio and other beautiful palaces. While on vacation in Florence don’t forget to take a look at the St. Mark’s Square, the Repubblica Square, the Holy Trinity Square and others.

Other places worth visiting are the Vecchio Bridge and the Santa Trinita Bridge. Last minute deals to Florence give you a chance to get closer to the lively Italian language.

Vacation in Florence is a perfect choice for young couples and families thanks to the romantic atmosphere in the city. Vacation in Florence on a low budget is absolutely possible if you use our website. Our prices will be a pleasant surprise for you.

Original prices suggested by the hotels and airlines in Florence 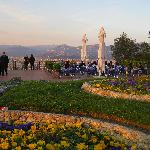 After a full day of sight seeing we were late (17:50) arriving to see David. However the very long line moved quickly and we were able to go inside before the 18:20 cut off time. W next... orth the visit even if we were late! More on TripAdvisor