Great Moscow is one of the top tourist destinations!

Vacations in Moscow have always been extremely popular, because this capital city of the largest country in the world represents only the best features of this country. This city is the most populous in Europe. Moscow is also one of the world’s top ten most populated cities. Sometimes it may seem that the capital of Russia is not a separate city, but a unique country with unique traditions, authentic culture and true royalty. The capital city of the Russian Federation is known to be one of the most expensive cities in the world, but our website can help you spend a vacation in Moscow on a low budget.

Historical facts about Moscow for tourists

Yuri Dolgorukiy is believed to be the founder of the city( according to the first reference in chronicles from 1147 he met his guests in the city of Moscow). Later the city began to grow and in the XVI century Moscow was the centre of the principality of Moscow and later it was the centre of the Tzardom of Russia. St. Petersburg was the capital during the period of the Russian Empire but the Soviet government made Moscow the main city in the country – the capital of the Union of the Soviet Socialistic Republics. Nowadays vacations to Moscow give you a chance to visit the capital city of the Russian Federation, which is the main city of the powerful country.

Last minute deals to Moscow. A list of tourist attractions

Tourists will be surprised by the enormous size of the city. Anyway, all the historical and cultural landmarks of the capital city are concentrated in its central part.

Low budget vacations in Moscow offer you pleasant walks along main streets, such as Tverskaya Street, Leningradsky Prospect, as well as a visit to the architectural and cultural symbol of the whole country – the Kremlin. This complex is the residence of the president and is one of the UNESCO World Heritage Sites.

Low budget vacation to Moscow is a possibility to have a walk on the Red Square, visit Lenin’s Mausoleum and see other tourist attractions, such as the Pokrovsky Cathedral, the Moscow Kazan Cathedral, the Historical Museum, the Voskresenie Gates, the Bolshoi Theatre, the Novodevichy Convent, the Tretyakov Gallery and others.

If you are planning a vacation in Moscow, don’t forget to put Moscow night walks on your to do list. A unique system of building, street and tree lighting will give you unforgettable impressions!

Low budget vacation in Moscow is an opportunity to see the magnificent Ostankino Tower. There are some events that the owners of last minute deals to Moscow shouldn’t miss . They are the Moscow International Film Festival, the Kremlin Cup, the Arch Moscow, the exhibitions in Moscow Automobile Salon and others.

Low budget vacations in Moscow are available: all you need to do is book a vacation package on our website. Trips to Moscow are always exciting, that’s why tourist from all over the world know about this city.

Vacation costs may vary depending upon the tour operator. If you want to have a low budget vacation in Moscow, we’ll gladly help you!

Original prices suggested by the hotels and airlines in Moscow 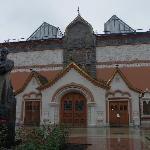 the very famous Tretyakov gallery will introduce you to the rich history and culture of the country through the eyes of many talented painters. The gallery covers art from the 12th next... century to paintings of the 2oth century. More on TripAdvisor